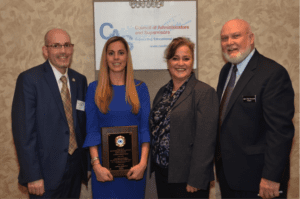 CAS is honored to recognize John Glen High School in Elwood for winning national recognition from the U. S. Department of Education as National Blue Ribbon Schools of Excellence. Special congratulations to the students, staff, parents and principal, Carisa Burzynski,for her leadership in earning a National Blue Ribbon School of Excellencewith designation as an Exemplary High Performing School.

The Council of Administrators and Supervisors congratulates all of the 300 public and 49 private schools nationwide, including 20 in New York State, honored with this award in 2018.

The Department honored all 349 schools at recognition ceremonies at the Omni Shoreham Hotel on Nov. 7 – 8 in Washington, D.C.   CAS will also recognize John Glen High School and Principal Burzynski  at the CAS Delegate Assembly on March 14, 2019 at the Plainview Holiday Inn.