CAS recently recognized Harborfields and Syosset High Schools for winning national recognition from the U. S. Department of Education as National Blue Ribbon Schools of Excellence. Harborfields High School Principal, Tim Russo, and Harborfields Assistant Superintendent, Dr. Rory Manning along with Syosset High School Principal, Dr. Giovanni Durante, were presented with CAS Achievement Awards by CAS President, Skip Voorneveld, at the CAS Delegate Assembly held on March 16, 2017, at the Holiday Inn in Plainview. Since 1982, the National Blue Ribbon Schools Program has been recognizing public and private elementary, middle and high schools where students perform at very high levels or where significant improvements are being made in students’ levels of academic achievement. A National Blue Ribbon School flag waving overhead has become a trademark of excellence, a symbol of quality recognized by everyone from parents to policymakers in thousands of communities. Schools honored with the Blue Ribbon School Award are recognized for their commitment to accelerating student achievement and preparing students for success in college and careers. Blue Ribbon Schools are recognized among their state’s highest-performing schools, as measured by state assessments or nationally-normed tests. The Council of Administrators and Supervisors congratulates all of the 279 public and 50 private schools nationwide honored with this award in 2016. We are especially proud to note that both the Harborfields and Syosset Administrators are long term members of the CAS Long Island family. The U.S. Department of Education presented National Blue Ribbon plaques and flags to fly proudly over both schools at the National Blue Ribbon Award Ceremony held at the Crystal City Gateway Marriott in Arlington Virginia during the first week of this past November. 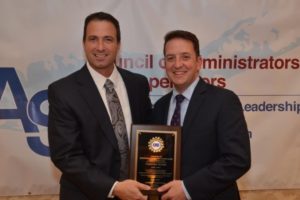 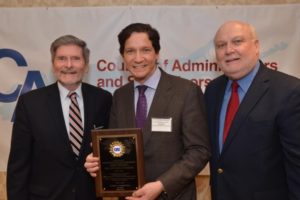