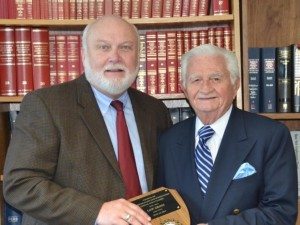 Affectionately known to all as “Uncle Tony” he is one of the founding members that brought CAS and ESSAA together in 1996. For the same time period Tony has ably served ESSAA as the Legislative Liaison with the NYS Senate and Assembly forging strong ties that have made us a recognizable force in Albany. Over the years he has earned a reputation as a passionate professional voice enthusiastically advocating the needs of front line school supervisors and administrators to both state and locally elected officials.

Tony Laurino has afforded our members with a lifetime of professional experience and knowledge throughout a career spanning more than fifty years.   He has been an elementary and secondary teacher, department chairperson, and building administrator in both the New York City Public Schools and the Smithtown School District.  Tony was on the Smithtown Executive Committee that in 1973 brought the Smithtown Administrators Association to CAS.  In 1975 he was appointed to the CAS Executive Board as the Suffolk Director and in the ensuing years he has served as Secretary, Treasurer, Vice President, Executive Vice President and President since 1995.

Under his watchful eye, CAS has grown from its small beginnings in the seventies to a robust professional organization representing over 1400 members in 76 local school district units throughout Nassau and Suffolk Counties. He initiated the CAS Scholarships program that over the years has awarded over $100,000 in college scholarships to the deserving children of members. As a visionary leader he has supported educational leadership and professional growth for our members through workshops focused on legal issues, contract negotiations, APPR, school safety, ever changing legislation and Commissioner’s Regulations. Tony understands the importance of local networking and established regional meetings and delegate assemblies to give members routine opportunities to share common achievements and concerns. He also fostered the development of the Annual CAS Golf Outing and other new initiatives focused on helping members with college and retirement planning.

Early on Tony recognized the vital importance of collective bargaining and the need to provide ESSAA and CAS members with outstanding legal services.  Tony’s vision and wisdom have insured that we employ top notch labor attorneys skilled in labor negotiations and educational law who have helped protect and enhance the negotiated rights of our members.

At a time where public education remains the target of an unprecedented assault by powerful interest groups within this State, we could ill afford to lose the contacts that Tony has established in Albany.  Therefore, we have asked, and he has agreed, to remain with CAS and ESSAA in the limited role of Legislative Liaison in Albany. This will allow us to maintain those contacts in Albany, while giving us time to foster new relationships with each.  We have benefited from his wise council for these many years and wish him and his family the very best in retirement.