Lindenhurst High School Principal Dan Giordano was officially appointed as the new Superintendent of Lindenhurst School District and will take over on July 1, 2014 from current Superintendent Richard Nathan, who is retiring at the end of this school year in June. 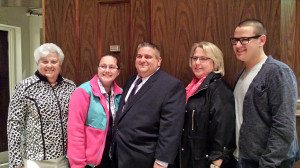 The BOE approved the resolution placing Giordano in his new post in front of a full auditorium filled  with residents and colleagues, who gave him a standing ovation.  Dan’s wife, mother, son and daughter, and her service dog, were also there to share in his appointment.

“It feels wonderful.  I’ve been here 17 years in the district, and I never realized I’d be getting to this point.  I’m very excited.  I think I will continue to work well with all of the wonderful staff here and help the district move forward.” Giordano told The Lindenhurst Gazette at the April 24, 2014 BOE community forum meeting.