Protect Your Rights As An Educator 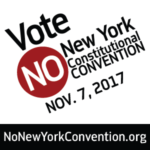 A number of special interest groups are promoting a Constitutional Convention (Con-Con). If one comes about the amendments they will push will cost money.  Where will the money come from?  A significant amount could be purchased at your expense.  Proponents of a con-con are promoting campaign finance, restructuring the judiciary, legalizing marijuana, pro-abortion, con abortion, gun rights, and restructuring the state legislature.  These groups will work together to produce a yes vote on November 7, 2017.

They are counting on a yes vote and using your tax dollars for their programs.  If we have a yes vote it could mean:

Changes to the Constitution, if needed, can be changed through the normal process.  This would be accomplished by the passage of the amendment(s) through two session of the legislature and approval by the voters in a November election.  This mechanism for change does not take tax dollars from the budget.

THE PROPOSITION WILL BE ON THE BACK OF THE BALLOT ON TUESDAY, NOVEMBER 7TH.