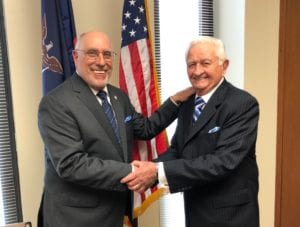 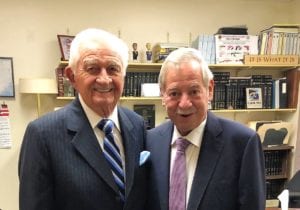 You may recall that last year CAS/ESSAA wrote legislation proposing tenured administrators, supervisors, etc. who move from one district to another be eligible for a three-year probational period, not four.   Due to the lobbying efforts of Bob Ungar, our lobbyist, and Tony Laurino, our legislative liaison, the bill passed both houses but was vetoed by the Governor sighting legal issues.

This year our CAS/ESSAA legal staff and legislative aides rewrote the bill taking the Governor’s objections into consideration.   Bob and Tony met earlier in the year to review our new legislation with Senator Shelly Mayer, Senate Education Chairperson, and Assemblyman Mike Benedetto, Assembly Education Chairperson.  Prior to a bill being introduced to the full committee the organizations affected by the bill are given an opportunity to make suggestions.  CAS/ESSAA attorneys then refined their suggestions to the legislation which in no way changed the bill.

Presently, Senator Mayer put the bill before the Senate Education Committee and they passed it on to the floor of the Senate (Bill S4007). Assemblyman Mike Benedetto, Assembly Education Chair, will sponsor a “same as” bill in the Assembly with Assemblymen Peter Abbate and Mike DenDekker cosponsoring the bill.

On a recent visit to Albany, Tony met with Assembly Education Chair and Assemblyman Peter Abbate. Also, Bob Ungar, who is in Albany every day the legislators are in session, has been stressing our stated concerns regarding the legalization of the recreational adult use of marijuana and advocating for limiting student access to e-cigarettes.

While both houses consider passing the tenure bill, Bob and Tony will continue lobbying against legalizing marijuana and for establishing limits on e-cigarettes and flavored components.