Proponents For A Constitutional Convention (Con-Con) 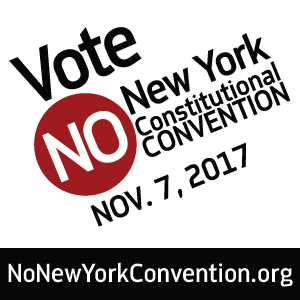 The coming months will be filled with media coverage urging voters to vote for Constitutional Convention (Con-Con) on November 7, 2017.  Many self interest groups are spending hundreds of millions of dollars to promote a successful ‘Yes” vote.  If the voters approve a convention, delegates would be elected in 2018 with the convention held in 2019.  Advocates of a convention contend that the New York State Constitution is long overdue for a change.

Upstate interests support three autonomous regions, each with its own magistrate (Governor) and its own legislature.  Upstate interests have for many years felt that downstate excessive business regulations and unfunded mandates have produced excessive harm for them.

Another change being promoted is the elimination of the present Assembly and Senate.  This view holds that one house and the Governor is the simplest and most effective way to run the State.

Various political, and vested interest groups, are advancing changes in the administration of elections, campaign finance, the structure of the judiciary, marijuana legalization, pro and con abortion, gun rights advocates, and environmental legislation.  Each group will view a Con-Con as an opportunity to enhance their agenda and vote “Yes” for a Con-Con.  The alliance of these groups will be a formidable “Yes” vote.

It is almost certain that questions on tenure, contracts, pensions, and working conditions for educators will be a priority.  Special interest groups will advocate the saving of taxpayer dollars by the elimination of one or more of our protections and rights.

It is necessary that each CAS (ESSAA) member promote a “No” vote on November 7, 2017.  Presently the vote on whether or not to have a Constitutional Convention is on the back of the ballot.   However, there is discussion to place it on the front of the ballot.  Look on both sides of the ballot.

Continue to discuss the need of a no votes with your family and friends. We can win this – but we need your constant assistance.